The romantic allure of Greenwich to many a traveller – to stand at the point where east meets west. But if it’s romance you want, well, that’s just the tip of the iceberg.

The maritime history of Greenwich is mainly what the city is known for today. This is its most obvious draw because of the Old Royal Naval Academy and the National Maritime Museum.

Then, of course, for the romance of the stars and the skies, there’s the Royal Observatory, where nothing says east-meets-west to visitors quite like straddling the Prime Meridian. 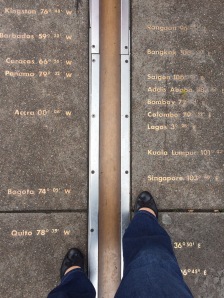 So for those who have little or no interest in the subject, no amount of enticing photos would probably convince you to make that short trip along the Thames into Greenwich whenever in London.

But perhaps if you were like me – a fan of most things British who gets an odd kick out of walking in the footsteps of men and women from the past – what if I tell you that Greenwich was at the crux of events involving three remarkable monarchs who’ve collectively made the biggest impact in shaping Britannia?

Off with Her Head

Henry VIII was born here in 1491. The king who famously married six times, with two of his wives beheaded.

Succumbing to the pressure of ensuring the survival of the Tudor line (his father was the first ever Tudor monarch and he only the second), Henry VIII broke away from the Roman Catholic Church when it refused to grant him an annulment from his marriage to first wife Catherine of Aragon, who couldn’t provide him a male heir.

He then formed and headed a new church (a precursor to the Church of England) in order to marry Anne Boleyn, who eventually lost her head in the Tower of London.

Henry VIII’s two oldest daughters, the Catholic Mary I (with Catherine of Aragon) and Elizabeth I (with Anne Boleyn), were both born in Greenwich as well. Mary I’s reign was extremely divisive and, therefore, of the two, Elizabeth’s 44-year reign proved to be infinitely more successful. 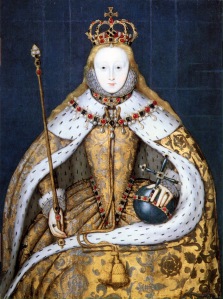 Popularly referred to as the Elizabethan era, it was a golden age in which the works of the likes of William Shakespeare flourished and the defeat of the Spanish Armada further established England as a great military power.

Henry VIII and Elizabeth I. Father and daughter. Two out of only five Tudor monarchs whose impact on history was so profound they both continue to be immortalised in movies and television to this day.

But what caught my imagination the most involved the third monarch.

Greenwich welcomed into England the person the current royal family, the anglicised House of Windsor, directly descends from.

He was a foreigner. A German from Hanover sent over to England to practically save Britain and allow the institution of the British monarchy to continue as we know it today.

How this came to be?

No to Roman Catholics!

The year was 1701. William III, who first co-ruled with his wife, Mary II of the House of Stuart, then ruled solely upon her death, had no heirs. Upon William’s death, the throne was to go to Mary’s sister, Anne, who also had no heirs.

To ensure a smooth succession, Parliament passed an Act strictly prescribing that the crown would go to Protestants only. No Roman Catholic was ever to succeed the British throne. And along with this Act, the power of the monarchy had diminished substantially, transforming the monarch into a figurehead and tipping the scales in favour of the people through Parliament.

Because of this no-Catholic condition, the closest blood relation to stand next in line to the throne was Queen Anne’s cousin, the Electress Sophia of Hanover, granddaughter of James I of England and Ireland (James VI of Scotland).

There were many others with a much stronger claim to the throne. Unfortunately, they were Roman Catholics – and, more importantly, had no intentions of denouncing their faith.

Sophia was a charismatic and effective ruler of Hanover whose intelligence preceded her. She was not only Protestant, she also happened to have seven living children, six of them male.

The childless Queen Anne had absolutely no intentions of sharing the limelight with her popular cousin. Sophia, therefore, never got to set foot in Britain. She died just two months before Anne’s death in 1714.

So the job of taking over the British throne fell squarely upon the shoulders of Sophia’s eldest son, George Ludwig. The very German, non-English-speaking King George I of Britain of the Royal House of Hanover. 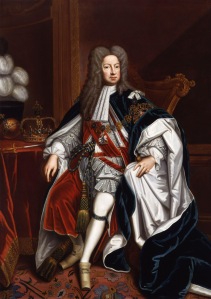 One Fine Sunday in Greenwich

On board a clipper from central London, we approached Greenwich just as George I had done. By the river Thames.

From the pier, a good first stop would be the Visitor Centre in the Old Royal Naval College, a UNESCO World Heritage Site and location of the old Greenwich Hospital and prior to that, site of Greenwich Palace where Henry VIII and Elizabeth I were born.

The highlight of the building is the Painted Hall, whose walls and ceilings are adorned by artist James Thornhill’s depiction of the promise of George I’s reign: stability and the continuity of his line – showing images of his mother Sophia, down to his son, George II, and his many other children. 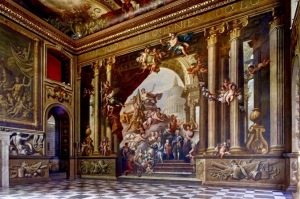 For fans of the oceans and ships and battles, the National Maritime Museum would be a great stop. Our sons weren’t with us on this trip, however, so we actually skipped it. However, this is not to be missed next time.

The Royal Observatory and the Prime Meridian are perhaps the most popular attractions in Greenwich. The lines to the Observatory during our visit in autumn weren’t particularly long and they were moving somehow.

It was the Prime Meridian that was slightly trickier to secure a spot for a photograph of… uhm, well… my feet. But with patience came great reward. I got the photo I had hoped for.

However, I noticed that Manila wasn’t indicated anywhere at all (hey, our city was occupied by Britain from 1762-1764 during the Seven Years’ War under George III!) but Singapore and Kuala Lumpur were close enough, I guess. 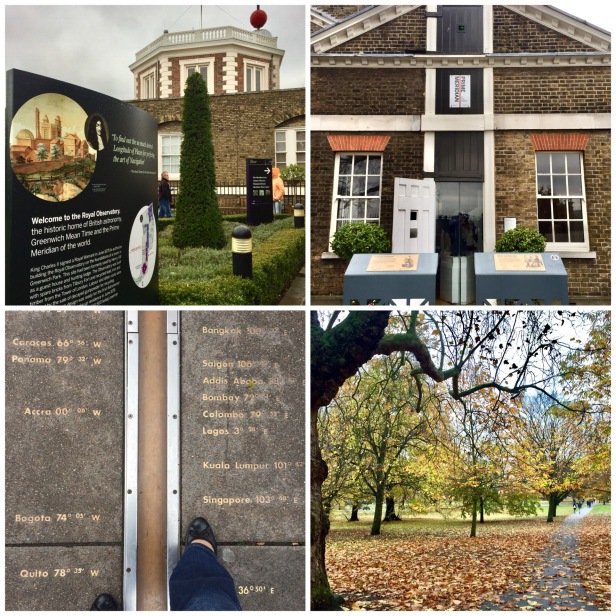 After all that madness, take a relaxing stroll and cut across lovely Greenwich Park to get to Greenwich Market.

The best day to go is Sunday. Regarded as one of London’s best covered markets, with vendors offering a wide selection of international food along with over a hundred stalls selling arts-and-crafts and collectibles (and on some days, antiques), Greenwich is the most vibrant on this day. 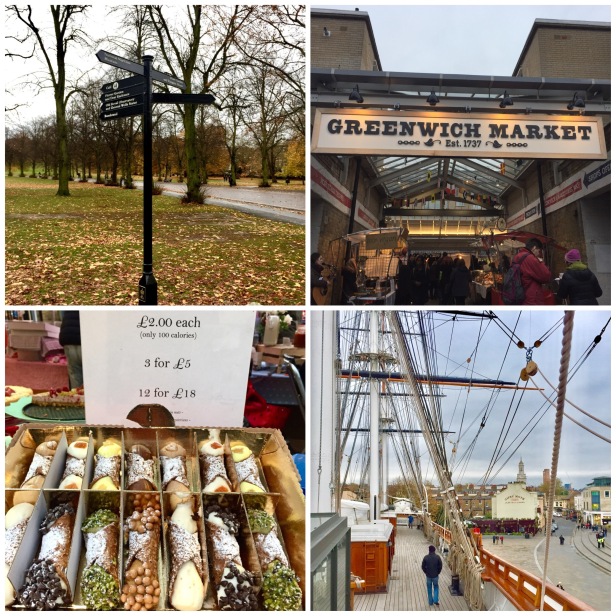 On our way to catch the clipper back to central London, we passed by the fun and fascinating Cutty Sark, which I wrote about in another post.

But let me end my story with the place my husband and I actually began our day in Greenwich, at Our Ladye Star of the Sea. An 18th century Roman Catholic Church about 15 minutes on foot from the pier, it was here that we came to attend the 9am Sunday Mass. 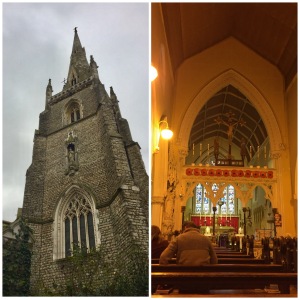 A poignant welcome to Greenwich, I thought, given the town’s significance in England’s break with Rome.

Henry VIII may have turned his back on the Pope but towards the end of his life reversed many of the drastic policies he instituted in the English Church.

On his deathbed, for instance, he went to confession. He also left behind money to pay for masses to be offered in his name after his death. Fundamentally, Henry died a Catholic.

Yet it was his break with Rome that made possible for the throne to be handed down to George I almost two centuries later. The Protestant, German king who started a dynasty that finally brought stability to Britain.

An entire kingdom’s knight in shining armour. What could be more heroic than that? 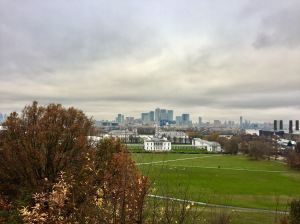 • For river travel between central London and Greenwich aboard the clippers of the MBNA Thames, you can use your Visitor Oyster Card, which you must buy before you arrive London. We got ours at the U.K. visa center in Manila but you can buy it online.

– You can’t top up pay-as-you-go credit on your Visitor Oyster card at the pier, so make sure you have enough credit before you travel.