An indisputable Dutch icon, windmills are part and parcel of the Netherlands’s identity. So how could we possibly leave Amsterdam without showing our kids any of these beauties?

Tell me you don’t think of windmills whenever the subject of the Netherlands comes up!

Even some of the most seasoned (jaded?) travellers get giddy as a child where windmills are concerned. I was already in my mid-20s the first time I laid eyes on these windmills, and even for me it was like stepping into Disneyland.

Okay, granted I had seen windmills first prior to ever setting foot in any Disney theme park, but you get my drift.

Of course, it also could very well be just me (the giddy-as-a-child bit, not the jaded part.)

But really. As iconic as tulips, canals, milk and cheese, and wooden clogs are to the Dutch culture, to me these classic windmills deliver the most powerful visual punch.

So after days of enjoying city life in Amsterdam and its fantastic museums, I dragged my husband and our boys to what others might probably consider as one of the most touristy destinations possible in the country – but which I prefer to view instead as an interactive and fun way to catch a glimpse into a nation’s past: the 18th- and 19th century village of Zaanse Schans.

Located a mere 20-minute train ride away from central Amsterdam, Zaanse Schans is set along the banks of the River Zaan.

Here you will find an interesting collection of restored windmills that still do actual wood-sawing and milling of spices, paint pigments, and grains. Some of them do require a minimal fee in order to climb and explore, which I think is only fair as entry into the village is free of charge.

There are also workshops that demonstrate traditional cheese-making, clog-carving, sail-weaving, and other Dutch handicrafts (along with the opportunity to purchase a souvenir or two, of course).

You can walk into a merchant’s or fisherman’s cottage, take a break in one of its restaurants, or maybe stay the night in its one and only B&B (this we didn’t get to do as we were there only for the afternoon).

The biggest draw for me, however, was the simple fact that majority of these structures are authentic and have been relocated here (from 1961 onwards) for our learning and viewing pleasure.

Coming here is literally a step back in time!

A short walk from the train station after our arrival in Zaanse Schans, we were suddenly welcomed by this wonderfully familiar scent wafting through the air. It could only be cocoa, I thought. That unmistakable aroma of rich, deep, dark cocoa.

We soon realised that we were actually walking outside a cocoa factory. The city of Zaandam, where Zaanse Schans is located, appears to have a long history of producing chocolate.

The aroma seemed to follow us (or was it the other way around?) even beyond the cocoa factory, along the 15-minute trek from the train station extending all the way towards the windmills in the village proper. And I’m certainly not complaining.

I’ve still got the pair of pink wooden clogs and traditional lace bonnet and apron from my first visit to Zaanse Schans over a quarter of a century ago (😱). Kitschy, sure. But hey, I couldn’t take home a windmill back then – or ever, for that matter – so I sure was happy to have these items as tangible reminders of that trip.

This time around, however, I got something way better. I don’t need any visual reminders of the Netherlands anymore. Now I have new, happier memories of this last visit with my family to hold on to.

And, oooooh, the memory of that delicious aroma of cocoa doesn’t hurt either.

So what better way to end our visit on a blustery winter afternoon than to munch on some stroopwafel followed by a warm cup of… what else, Dutch cocoa? 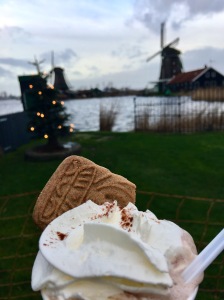 You can take a boat tour or a ferry ride around Zaanse Schans. There are also bikes for rent (this is the Netherlands, after all). But the best way to explore the village is definitely on foot. Not everything is open at all times, however, so it’s always best to check out their website.