Drawn to this ancient path that’s gained an unprecedented rise in popularity over the last two decades, I answered the call of the road and made the journey my own.

Many an article has been written about the Camino de Santiago. Tips on what gear to bring, how to prevent blisters, the history of the road and the saint who it’s named after, and personal reflections of countless pilgrims who’ve trekked the different paths that lead to Santiago de Compostela.

This post won’t exactly be repeating those things in detail. Instead, I will mostly be highlighting here the stuff that worked for me and the reasons for the choices I made. And hopefully you’ll be able to pick up something that might help you should you decide to embark on your own Camino.

Making it My Own

I had decided years ago that I would celebrate my 50th birthday by taking a walk of gratitude to Santiago de Compostela.

I also knew early on that I would do it alone.

And so here I was in the early morning of Day 1, all by myself on a foggy, autumn morning in the middle of a quiet street right along the ancient Camino trail in old town Sarria. With the doors to the inn I just bid farewell to now shut behind me with finality, it suddenly hit me: what in the world have I gotten myself into?!

Should I or Shouldn’t I?

Here’s the deal. When I was in my 20s and 30s, I had two major episodes involving herniated discs that rendered me unable to walk and kept me in hospital for days.

The first time it happened, I was set on backpacking around Europe. I even had my plane tickets ready. Naturally, my doctor forbade me to go. But I willed myself to get stronger, bought a small suitcase with wheels to replace my backpack and, promising to don my steel brace during the entire trip, went back to my doctor for his blessing.

The rest, as they say, is history.

Now here I was at 50, placing complete trust in a path I’d never taken before – on foot, on my own, backpack in tow, no maps, no GPS, and on a tight schedule. What could possibly go wrong?

It is said that the Camino forces you to face your fears. Well, hello there, fear number one: surrendering control.

Going at it Solo

Whenever I make travel choices, as a wife and mother, I have a responsibility to make sure I return to my family healthy and in one piece. It’s only fair, don’t you think?

My Camino was to be a walk of gratitude, after all, not a death wish. So I took several things into consideration and decided on the level of risk I was willing to take.

* First off, given the limited time I had, I chose to walk only the last 115km to Santiago on the oft-traversed Camino Francés in 5 days. The Pyrenees and the Meseta will have to be for another time.

Note: Reports of attempted abductions and attacks (and the murder of Asian-American Denise Thiem in the spring of 2015) did cross my mind. Though these were isolated cases involving sections of the Camino I knew I was NOT going to pass, they served more as a reminder to constantly be aware of what goes on around me.

* With my body’s aversion to the heat (and my constitution’s to huge crowds), I scheduled my walk in autumn when the weather is generally cooler (and there are less people).

* Given my spine situation, I made sure my backpack didn’t weigh any more than what its 20-litre limit allowed. (I do take Pilates, so I’d like to believe I’m more fit now than when I was younger.)

* I was going to take the bus to Fatima and other cities in Portugal after my Camino, so arrangements were made to transport my main luggage between hotels.

* To avoid unpleasant surprises, such as a bad blister or worse, an injury, I broke in my shoes and even practiced walking in them 20 kilometres straight with a loaded backpack before my trip. 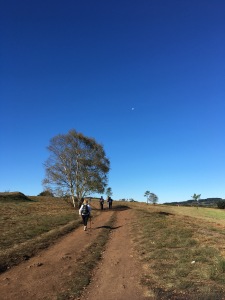 Let me begin by saying that I felt totally safe during my entire Camino. In mid-autumn, there were long stretches where I found myself all alone on the road, moments I absolutely relished.

However, I just thought that keeping a few things in mind was simply the smarter thing to do.

1. Wanting to keep as pure a Camino experience as I could by not relying on my phone’s GPS, I made sure I still had my phone ready in case of an emergency. I made sure it was fully charged at the start of each day and I kept a battery pack handy. I also activated its Find My iPhone feature, just so someone knows exactly where I am at any point.

2. Know who to call locally in case of emergency and, if possible, set their number on emergency dial.

3. Keep a lightweight first aid kit in your backpack.

4. Trust your instincts. Wait to walk with a group whenever you feel uneasy.

5. Ditch those earphones. Be aware of your surroundings.

I must admit, I went on the Camino armed with an arsenal of playlists to suit whatever mood I might expect to be in whilst on the road. But the only time I ever listened was to block the sound of another pilgrim’s voice, whose decibel I felt was a tad higher than what was acceptable to the human ear.

I was so absorbed in what I was listening to that I failed to pay attention to what I was stepping on. And so, I twisted my right ankle.

I saw it fold frighteningly 90 degrees inwards that one pilgrim who saw it had to ask me how I was. But luckily, I got to jerk it back into position and, without skipping a beat, continued walking.

Looking back, I realise it could have been worse.

Plus, the sad reality is that most deaths on the Camino are of pilgrims and cyclists either getting hit or run over by motor vehicles or from heart attacks. A heart attack I can’t do much about but knowing when those fast-moving vehicles are coming, I certainly can.

So, no more earphones for me until I reached Santiago.

What Worked for Me

Believe me, not all blister prevention tapes, gels, and techniques are created equal. What worked for some might not work for others. So I tested them out while breaking in my shoes (and socks) and discovered which ones worked and which ones didn’t. 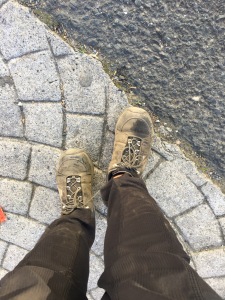 I also heeded a friend’s advise to invest in lightweight walking poles. Next to my lightweight, waterproof hiking shoes and amazing backpack, these babies were my absolute best purchase. But get the ones with rubber tips that don’t make any clanking sound when they hit the pavement. It can get pretty annoying after a while.

Another friend’s suggestion that I found brilliant was to take the time to stop at establishments along the road.
I used this as an opportunity for toilet breaks, whether I needed one or not (otherwise, I ran the risk of having to do it in the bushes! ), buying a drink as a courtesy to the proprietors (I saved the water I packed for when I needed it along stretches where establishments were few and far between), and getting my Pilgrim’s Passport stamped.

Lessons from the Road

The experience can be as introspective as one chooses it to be, or as light and jovial as it can possibly get. Or both.

On this particular Camino, several things that normally test my inner strength did surface – details of which I’ll talk about in another post.

But suffice it to say that as part of my journey, I was left with no choice but to face them head-on right there on the road.

In the midst of my Camino,  where else could possibly I run to?

And as I stood near the edge of the cliff in Finisterre, close to the spot where pilgrims used to burn items they brought along the road as a symbol of letting go of the past, I gazed down, expecting to find the raging waves of the Atlantic crashing against the rocks. Instead, the waters were calm. Serene, even.

This was the Camino’s gift. Just as the Camino forced me to face my fears, it, too, gave me exactly what I needed, when I needed it. 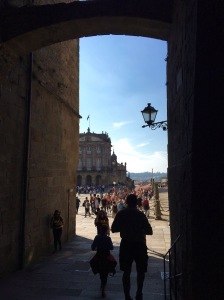 Postscript: My Camino as a Walk of Gratitude

My journey actually began the moment I announced that I was embarking on this adventure. I got such overwhelming support from family and friends, it was downright humbling.

Like Doodle, who after having done the walk with her husband gave me firsthand practical tips that’s formed the basis for the ones I now share with others.

Joy, who walked 20+km with me from Dasmariñas, Cavite all the way to Tagaytay so that I could appreciate how a long walk actually felt. And Joy’s husband Mat, who followed us in a van filled with provisions, and his brother Romy, who made sure we were safe from other vehicles.

Myla, who insisted I walk with her in the pouring rain in order to test my waterproof gear.

My blog partner, Jennie, and our other fellow Titas – Bambi, Marie, and Monique who, with their husbands, all got together in a tapas bar back home to cheer me on via video call as I was approaching Santiago de Compostela.

My parents, sisters Pia and Pam, and brothers-in-law Ricky and Erwin, for their tireless support and encouragement – oh, and for getting me the supplies I couldn’t readily source in Manila.

And, of course, my husband and three boys, who time and again indulge me on my whims to go on these adventures.

You are all a big reason why I did this walk.

4 thoughts on “MY CAMINO: WALKING SOLO TO SANTIAGO”