Cognizant of the deep connection we Filipinos have with Spain, I felt it was time to rediscover its capital city by re-tracing the steps of our great national hero, Dr Jose Rizal.

I’ve always been a fan of Rizal. A doctor, writer, artist, speaker, traveller – he was a true Renaissance man with a great love of country.

When I was young, though, I thought heroes should be about brute force or actively saving people’s lives. What, a national hero who didn’t fight in a war?

But as I got older, I began to understand. Rizal did fight a war. He used the power of his pen to produce writings that led to the Philippine Revolution and our eventual independence from Spain in 1898, just two years after his death by firing squad.

Rizal spent many years in Madrid as a student. Yet what about Spain’s capital city strengthened his resolve to fight for reforms in his country?

Counted among the ilustrado, or the Philippines’s educated elite during the 19th century Spanish colonial period, Rizal joined like-minded Filipino liberals in exile or attending university abroad, getting a taste of freedom while enduring the challenges of living in a foreign land and fighting for reforms back home.

Knowing I had only a few hours to spare, I downloaded the guide put together by the Philippine Embassy in Madrid, prioritised the spots I wanted to see, and based the flow of this self-guided walking tour on that.

First stop is a 15-minute taxi ride from central Madrid to the neighbourhood of Vallehermoso. I got there on a cool Saturday morning to find a fair share of weekend runners on the streets and was lucky enough to witness this part of the city few tourists wander (except Pinoys like me) begin the day.

You can’t miss Rizal’s monument when you get here. Flanked on both sides by markers holding the Spanish and Filipino versions of the hero’s final farewell written on the day of his execution in 1896, the monument was a gift from the City of Madrid to the Philippines to commemorate its 100th year of independence. It was patterned after the original in Luneta Park in Manila.

Seeing it here, however, brought about a stirring I didn’t quite expect from what I thought would be a mainly intellectual pursuit. It certainly set the tone for the rest of the tour. 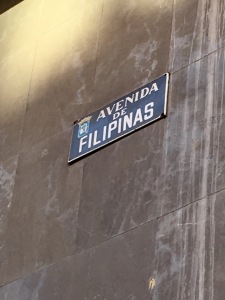 Less than 10 minutes away on foot along Avenida de Filipinas is the metro station that’s also named after Spain’s former colony. Though it wasn’t part of the Rizal Tour, I thought I should check it out since I was already in the area.

Another 12-minute taxi ride from the Islas Filipinas station was where Rizal took painting classes while he was in Medical school.

Chasing Rizal or not, I think a stop at the Academia’s museum and gallery is a great way to get some quiet time. It’s smaller than the Prado and in no way takes its place, but if you’re in the mood for a place that’s less hectic yet offers an art collection worthy of your visit, I’d go as far as to say that the Academia might even be a better alternative to the Thyssen-Bornemisza or the Museo Reina Sofia.

I must admit, I spent more time here than expected, which led me to skipping some parts of the Rizal tour. But I think it was a good call as it made me appreciate the draw this place had for Rizal. Juan Luna and Felix Resurreccion Hidalgo studied Fine Arts here as well.

At this point, I had to prioritize and skip the nearby Congreso de los Diputados (formerly Las Cortes Españolas where Rizal would join his friends lobby for Philippine rights) and the Ateneo de Madrid along C/ Prado, 21 (no connection to our own Ateneo de Manila; rather, it was – and continues to be – an exclusive club for men where Rizal studied English and enjoyed theatrical presentations and literary readings).

Headquarters of Circulo Hispano Filipino (a forum for Filipino students) and residence of Consejo de Filipinas’s vice-president, Pablo Ortiga y Rey, 22-year-old Rizal stayed here from autumn of 1883 until August 1884 where it’s said he took a liking to his host’s daughter.

Rizal lived briefly in No. 8 from May to June of 1883, but the highlight on this street was the hangout of Rizal’s and other members of the Filipino community.

Shuttling between Madrid and Barcelona, López Jaena was eventually replaced as the paper’s editor by Marcelo H. Del Pilar. Sadly, the former died years later of tuberculosis and was buried in a mass grave in the hills of Montjuic in Barcelona.

And curiously enough, Rizal, López Jaena, and Del Pilar, who were considered to be the triumvirate of the Filipino Propaganda Movement, all died on the same year – 1896.

This next place may have been closed permanently but I felt the need to see it just the same.

A popular meeting place in the earlier days for our Filipino propagandists, Los Gabrieles had murals made of decorative tiles that Rizal had described in a letter to his sisters. Such a pity that I didn’t get to catch it open. It was completely restored only in 2004 so I’m not sure what’s being done to it now. Hopefully, the new owners will find a way to incorporate them into its design.

I really wanted to see this hotel, which was frequented by the Filipino community during Rizal’s time and a favourite venue to mark important events all the way until it closed recently. Among these was the June 25th, 1884 banquet held in honour of both Juan Luna and Felix Resurreccion Hidalgo for winning the gold and silver medals, respectively, in the 1884 Madrid Exposition’s fine arts competition.

Rizal was invited to deliver the toast to Luna and Hidalgo and, starving student that he was (his family’s finances were being squeezed back home), there Rizal got his first meal of the day.

Fortunately, I just learned that the hotel will re-open as Gran Hotel Ingles in February 2018! With only 48 rooms and promising to honour its 131-year history, I hope it continues to display the marker indicating the Luna-Hidalgo Banquet.

A marker indicates that here lies the former office of the Filipino community’s newspaper, La Solidaridad. Named after the Barcelona- and Madrid-based Filipino organisations that advocated reforms, the paper became a channel by which the community voiced its desire for recognition and autonomy from mother Spain. It ran from 1889 to 1895. 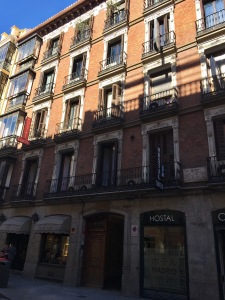 Rizal wrote many essays for the paper, most notably La Indolencia de los Filipinos, in response to the perception that our country’s lack of progress was due to the Filipino’s laziness.

Again, I had to skip a couple of places:

C/ Amor de Dios 13-15 (where Rizal first lived in Madrid) and Palacio de Cristal the site of the Philippine exposition of 1887 in what was Rizal’s favourite park in Madrid, Parque Del Buen Retiro. I believe the latter especially deserves more time

and so I walked straight from Atocha 43 to Atocha 106 about 10 minutes away.

Now housing the National Institute of Public Administration in front and the Ilustre Colegio Oficial de Medicos (association of medical doctors) at the back, this building was where Rizal studied medicine from 1882 to 1884 prior to specialising in ophthalmology in Paris. Rizal took up medicine in order to heal his mother of her cataracts, but it’s said that his heart really belonged to the arts.

Finally, I hopped on a cab and headed straight 12 minutes away to my last stop.

This was where Rizal began to write his novel, Noli Me Tángere, a required reading for high school students in the Philippines. Knowing I would be returning to Manila for college, the school I attended while my family was based abroad provided me a tutor for this very purpose. And I was lucky enough to have a teacher who was passionate about our history and painted a clear picture in my head of what life was like for our country back then.

Spanish, however, was understood by the educated elite based in the provinces who themselves were responsible for leading the revolt in these areas. The rest, as they say, is history. 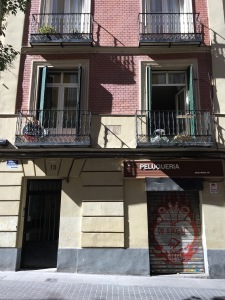 I can imagine Rizal sitting at his desk in his tiny room on Calle Pizarro, a gas lamp by his side, the evening shadows bringing to life Noli Me Tángere’s protagonist, Crisostomo Ibarra.

A fitting way to end my Rizal tour, I think.

I guess I could have taken a walking tour of Rizal’s haunts with a proper guide, but I felt I had had sufficient information to get me through the few hours that I had. And frankly, I preferred the flexibility to take my time whenever I felt like it and, well, the silence. The downside to this, however, was that I had to skip a few places.

And so for next time, I’d like to go back and take a tour inside the Ateneo de Madrid, Palacio de Cristal/El Retiro park, and the old College of Medicine, three places which I believe deserve more time to appreciate fully. To really get into Rizal’s head, if you will.

And I’d most definitely want to stay at the Gran Hotel Ingles!

Of course, I can only venture to guess how Rizal’s years in Madrid strengthened even further his desire to see his beloved country independent and in control of its own destiny. For as we can see, Rizal himself got to experience first hand what it was like to be free. And freedom can be addictive.

As travel often does to a person, it broadens the mind, opening up a whole new world of possibilities one never knew existed, the opportunity to be all one can be simply all for the taking.

It didn’t hurt, either, that progressive Spaniards were against the appalling conditions in the Philippines and supported our call for reforms.

Rizal’s stay in Madrid, therefore, must have confirmed to our young hero that the hopes and dreams he had for his country and his countrymen could be within one’s grasp. All one had to do was reach for it.

I wanted to walk in the footsteps of Rizal to try to understand what was going through his mind. And in the process, I discovered a side to Madrid that’s become my own.

The Self-guided Rizal Walking Tour put together by the Philippine Embassy-Madrid may need some minor updating but it’s definitely a great starting point.