Lured into this ancient Roman path by an epic film that, as it turns out, took place in a different part of Italy entirely, it was a case of a curious mistake gone wonderfully right.

One of the oldest paved roads in history, it was named after the Roman censor who had its first section built as a military road, stretching from Rome towards the south near Naples in 312 B.C. His name: Appius Claudius Caecus.

That a 65-kilometre portion of it remains to this day as the longest straight road in Europe is a testament to Roman engineering.

And glimpses of this fabled road on previous trips to Rome certainly fuelled both my curiosity and my imagination. The very thought of the amount of history it must carry within every bit of rock and gravel embedded here, all the stories just waiting to be revealed to a weary traveller on a long, lonely trek……..if only roads could talk. 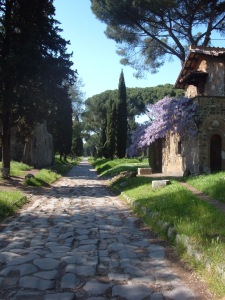 But what nudged me towards finally giving in to the pull of the old Appian way?

Remember the scene in the Ridley Scott film showing the stone gateposts that led to the home of the main character, Maximus (played by Russell Crowe)? No, those gateposts can’t be found here – but visions of them proved to be instrumental in my quest.

For I instantly connected them to the ones I had seen and romanticised about on those previous trips along via Appia Antica.

Similar gates like these dotted along this ancient road and the high walls that protected whatever existed behind them simply called out to me, as if begging me to discover what could possibly lay beyond.

Where could such a long tree-lined driveway lead to? Will it take me somewhere beautiful and enchanting? Does anyone still live there? (And if so, can we be friends?! Haha!)

Never mind if the Gladiator scene that captured my imagination was actually shot in Val d’Orcia in Tuscany, as I eventually learned. Save for the rolling fields of wheat, to me that gate could only have belonged in Rome’s Appian Way. (I don’t remember if the intention was for viewers to believe it was set in Rome, but that’s what I’m sticking with.)

And I most likely missed a huge chunk of the film, what with my hands practically plastered against my face to shield my eyes from all the gory scenes. I know, I know, what did I expect from a movie about gladiators?!

But now you can understand why my biggest takeaway from the film were scenes of Maximus’s home, convincing me even more that every road….. has a story to tell.

Discovering the Queen of All Roads

The opportune time to do it came during our family reunion in Italy. We had a big bus to ourselves, we had complete control over our time and our itinerary. Conditions were perfect.

There are a number of possible stops to take along the road, but we zeroed in on the ones that I thought would interest both the children and adults in our group.

A mere 15-minute drive from the center of Rome, this site helps visitors understand more fully the lives of the early Christians, the persecution that they faced, and the great lengths they took in the name of their newfound faith.

It may be difficult for us to imagine now what their struggles must have been like back then, but luckily, we chanced upon Salesian Bro. Obet Narvaez as he was wrapping up his session with another group. His excellent tour of Catacombe di San Callisto and its network of tunnels truly made the stories of the early Christians come alive.

I’m usually not a fan of catacombs – and there are several catacombs along via Appia Antica to explore, if you wish. But this one was different.

Unfortunately, I believe Bro. Obet has now returned to the Philippines but I’m pretty sure there are other guides as knowledgeable and as passionate about the subject as he was.

To plan your visit, check out the Catacombs website.

A few minutes’ walk along the backroads from the catacombs’ exit led us to a small church back along via Appia Antica.

Story has it that the apostle Peter, fleeing Rome and escaping crucifixion in the hands of Nero, came across the risen Christ and asked him, “Lord, where are you going?”. Quo vadis? To which Jesus replied, “I’m going back to Rome to be crucified again”.

It was this fateful meeting which then gave Peter the courage to return to Rome to continue his ministry and where he himself eventually gets crucified.

And built upon the site of this encounter between Jesus and Peter is the church that houses a slab of marble containing an imprint of what’s popularly believed to be Jesus’ feet.

Whether you believe the story or not, one can’t deny its draw among the faithful. Myself included. For others, it’s a curiosity at best. And that’s absolutely fine.

Either way, I think it’s a stop worth taking if only to get a sense of this remarkable story.

I don’t know about you but for me, where we eat is just as important as the sights we visit. A meal is almost always the highlight of any excursion.

With my sisters and their families living so far away from us, the desire for all of us to be together sharing a meal is ever present. Setting it against a lovely, Italian garden where we can all dine al fresco… well, that wouldn’t hurt either, would it?

And this is where Ristorante Cecilia Metella comes in. With an added bonus: it’s set on top of a small hill. 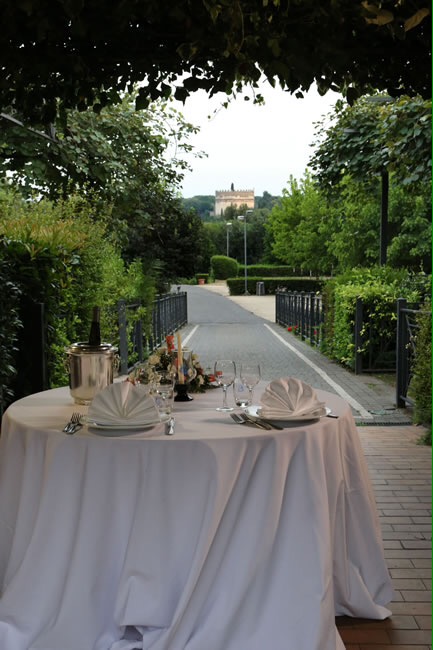 I do have to mention that reviews of this restaurant are mixed, but our family happened to have a great time. And I’m guessing it helped that:

How to Get There and Around

There are several ways to explore the old Appian Way independently.

One is, of course, by car. Just bear in mind that on Sundays, portions of the road are closed to vehicles, so you will have to leave your car in a designated parking lot and walk part of the way. Rental bikes are also available at the via Appia Antica visitors information center (open 9:30am to 7pm on weekends, 6pm on weekdays).

Another easy way is by public bus from central Rome to the via Appia Antica visitors information center. Bus 118 stops near the Colosseo and the Baths of Caracalla every 40 minutes, while bus 218 stops near the Basilica of San Giovanni in Laterano, running every 20 minutes.

The church of Domine Quo Vadis is a mere 80 meters away from the visitors information center, logically making it a good first stop, followed by the Catacombs of San Callisto, then lunch. Or in reverse order if you have time to explore only in the afternoon.

So, judging from all that we’d encountered on this visit so far – and there’s still more to discover, it seems like Maximus the gladiator led me onto the right path after all.

One thought on “TRAVERSING ROME’S VIA APPIA ANTICA”