A city in the south of France introduced to me by Julia Child, thanks to well-documented accounts of a happy year-and-a-half she had spent here with husband Paul, I came face-to-face with a Marseille that I did not expect to find.

“The air was brisk and breezy, and the harbor was redolent of sewage and decaying fish. There were mobs of sailors, soldiers, Arabs, gamins, whores, pickpockets, shopkeepers, tourists and citizens of every shape and size, all moiling and shouting…

The streets and gutters were cluttered with garbage. Masses of it. We decided this must be a legacy of the medieval habit of tossing refuse out the window.”

This was how Julia Child described her beloved Marseille while living in the city’s Vieux Port in 1953, as the famous chef recounted in her memoir entitled, “My Life in France”.

This was also the image of Marseille that had long been festering inside my head since I read the book when it was first published in 2006.

So when my blog partner, Jennie, came home one summer from a family trip to France that included a stop in Marseille, seemingly unscathed and armed instead with stories devoid of such harrowing details, I became intrigued.

Until finally, on a recent trip to Provence with my husband, I grabbed the chance to satisfy my curiosity and anxiously navigated our way towards this old port city in the Mediterranean – France’s second largest and regarded as the gateway to Provence and the Côte d’Azur.

Over the years, it’s become rather customary for us to begin our visit to any city with a short stop at a church, just to say thanks for a safe arrival.

In this case, what better welcome to Marseille than with a visit to the beautiful church of Notre-Dame de la Garde? Perched on top of a hill, the church and its lovely image of Our Lady both look out towards the sea, as if on a perpetual watch to protect their beloved city.

I knew the basilica was a definite must-see whenever in Marseille, but nothing prepared me for what lay ahead.

A winding road led us to the parking lot behind the church, on a promontory that faced inland. Then as we walked towards the facade of the church, we found laid out before us this absolutely gorgeous panoramic view of the city, stretching out all the way towards the water. 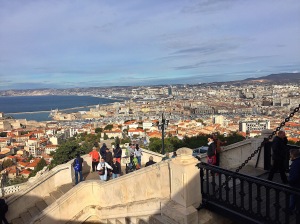 After taking in this fantastic sight, we eagerly trekked up the steps toward the main entrance to the church. And as soon as we entered… Bham! The sheer magnificence of this basilica just hit us. It was simply breathtaking!

Built between 1853 and 1864, the Romanesque and Byzantine elements used here are showcased in its beautiful murals, the colourful marble on the walls and columns, and its rich mosaics. All of it seamlessly put together and enhanced further by the natural and artificial lighting that abound the basilica.

Until now, I marvel at how it managed to look so grand without it being ostentatious. While obviously generating awe from everyone who saw it, plus given its stature as a basilica, it still gave off a rather friendly vibe. At least, I found it to be so.

As I ventured back outside to view all sides of the church’s exterior, a walk which incidentally rewards visitors with a 360-degree view of the city as well, it brought on a sense of calm and familiarity that I didn’t quite expect. Specially from a place that I had never been to before.

Maybe it was because the sun was out and the weather was nice and cool. Or that I found the size of the crowd to be just right. I really could have stayed here all day.

However, food beckoned. As it always does with me. Which eventually begged the question…

Alrighty. Let me put it out there now and get it out of the way. We did not have bouillabaisse. I know, I know, how could we?! Shame on us!

But considering how my husband doesn’t really enjoy fish, and bouillabaisse servings can be pretty big (as Jennie and her family had warned), I was not about to either waste money on something I couldn’t finish or force my husband to eat something he wouldn’t enjoy.

And because we were driving into Marseille and planned to be there only for the day, our choice of restaurant had to meet certain requirements, namely: 1. It should serve food we both enjoy; 2. It’s got to have great reviews; 3. It has to be close to convenient parking; and 4. It should be located in the Vieux Port and near the quays.

So search I did until finally, a winner: Le Bistrot l’Horloge, set in a charming square.

The restaurant was full when we got there on a busy Thursday. The clientele looked to be predominantly locals out on their lunch break, all nicely-dressed, in their 30s and 40s. So Jon, part-owner of the bistrot who also tended the bar, invited us to grab a couple of stools while they got a table ready for us.

We first ordered our drinks then began to study the menu. Typical of a bistro, this place is moderate in size and in its pricing. But one other factor that’s known to contribute to Le Bistrot l’Horloge’s popularity is its regularly changing menu, based on whatever’s in season.

The delicious octopus and pork dishes we ordered looked simple enough, but when they hit our mouths, Whoa! … the layering of flavours was simply out of this world.

The vibrant, casual atmosphere and the friendly service didn’t hurt, either.

After that fabulously satisfying lunch, we decided to go on a much-needed stroll along the Quai des Belges, past the open-air, reflective-ceilinged Vieux-Port Pavilion towards Quai du Port, then back along the wide Rue de la Republique and the pedestrian shopping area of Rue Saint-Ferréol.

I was on the lookout for a local shop selling the world-famous Au Savon de Marseille but somehow couldn’t find any. So we picked up our car and drove around to see more of the city before finally heading back to our base in Aix – where an outlet of the famous soap was practically next door to us anyway. (Read about Jennie’s visit to Aix here.)

The interesting drive around the old port area towards the imposing Cathedrale La Major revealed some pretty surprising  modern buildings, such as the MuCEM or the Museum of European and Mediterranean Civilisations, the Villa Mediterranée right beside it, and the FRAC regional centre for contemporary art.

As it turns out, all this had been possible thanks to the Mediterranée Project initiated in 1995, which pumped billions of euros to transforming and revitalising the city.

So where was the Marseille that I was practically afraid to encounter? I ask not with disappointment but rather with relief, of course. I admit I’m happy I got to visit the city at this period in time; otherwise, I probably wouldn’t have ventured to return, losing out on the opportunity to witness its impressive renewal.

But having gone around the city, connecting with some of its lovely people, and getting a taste – albeit a tiny one – of its essence, do I think Marseille is losing its authenticity in order to kowtow to tourists like me?

Let me answer that with another question: with a city like Marseille, would that even be possible?

As Julia Child aptly put it, “Marseille’s hot noise was so different from Paris’s cool sophistication. To many of our northern-French friends it was terra incognito: they had never been here, and considered it a rough, rude, “southern” place. But it struck me as a rich broth of vigorous, emotional, uninhibited life – a veritable Bouillabaisse of a city.”

Well, I must say…  I couldn’t have said it any better, Julia.