Just 12 kilometres from Avignon is a village named after a castle once built for a pope. But it’s probably better known today for something much more exciting to mere mortals like us.

Say Chateauneuf-du-Pape and what do most people automatically think of? Wine. At least, I did.

Nestled in the Vaucluse region of France, wine-making had been around here way before the Popes moved into Avignon in 1309. Their presence, however, may very well have taken it to the next level, contributing to the wealth in the area.

The pope responsible for the transfer of the papacy from Rome to Avignon? Clement V, who had numerous visits to this village as a guest of the bishop.

But it was his successor, Pope John XXII, who had the “new castle” built from 1317 to 1333. Hence, the name Chateauneuf-du-Pape.

Unfortunately, the castle was completed just one year before John XXII’s death. So he didn’t really get to enjoy the castle much, if at all.

A pity, really, as the castle lies in an enviable position at the top of a hill, overlooking the River Rhône, the valley, and its vineyards. Built both for defence and as a summer residence for the pontiff, it would have been a perfect spot for a quick getaway from the daily rigours of papal life.

But no pope ever really used it since, except the antipope Clement VII, referred as such because his legitimacy as pope had been in question. As a result, he occasionally needed a safe place to run to for refuge. 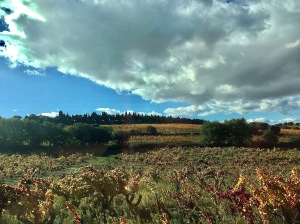 The papal seat was eventually transferred back to Rome in 1378, followed by years of neglect, wars, and misuse. Which led to the castle’s condition as we see it today – in ruins.

Oh yes, but the wine.

Chateauneuf-du-Pape is known primarily for its nice, full-bodied reds. As it turns out, white wine makes up only about 5% of production, and their appellation doesn’t allow them to produce rosé at all.

Now I don’t really understand wine that much (read about my Beaujolais experience here). I just drink and enjoy it.

Though wines for me generally fall under any of these three major categories:
1) Pretty Good (super easy to drink both on its own and when paired with the right food);

2) Not Bad (just okay on its own and can possibly improve when paired correctly); and

So after a quick stroll around the castle, we walked past the ruins and followed the signs that finally led us down to Le Verger des Papes.

Yup! It’s time to partake some of that wine the Popes at Avignon most likely went bonkers for. (And I do mean that in the most respectful way, of course.)

The Popes’s Orchard. Why it was named that rather than Vignole for “vineyard”, I don’t know. But hey, who can argue with success?

A Michelin-rated restaurant, its location couldn’t be any better. Not only is it literally steps away from the castle, it also has a magnificent view of the village and the River Rhône. For persons traveling on wheelchairs, however, I can see how a visit here will require some planning.

Scheduled to go for Sunday lunch, finding a table did worry me a little bit. I wasn’t going to have my husband drive me all the way there only to be turned away, was I?

So I sent them an email prior to our visit to make a reservation. I never got a reply, but we decided to take our chances anyway.

As expected, the place was jumping when we got there! Luckily, it was past 1pm so a table had just become available. Not by a window as I had hoped, but a pleasant spot nevertheless. 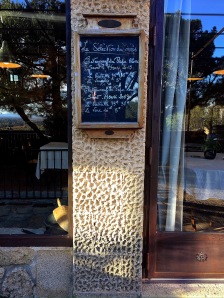 Families, couples, and groups of friends filled the restaurant. All French-speaking and many seemed to be familiar with the service staff. Regulars from the area, I assume. Which is exactly what we hope for whenever we look for a restaurant. Michelin-starred or not, regular local patronage is always a good sign.

I did come across some reviews saying that the service staff were snooty, but they were all quite helpful during our visit.

In fact, they patiently explained to us a few items on the menu. And about some rather curious contraptions that were hanging on the wall.

Well, these turned out to be farming tools, not the 50 Shades variety as I may have suspected. Although the latter would have made for quite a story, don’t you think? 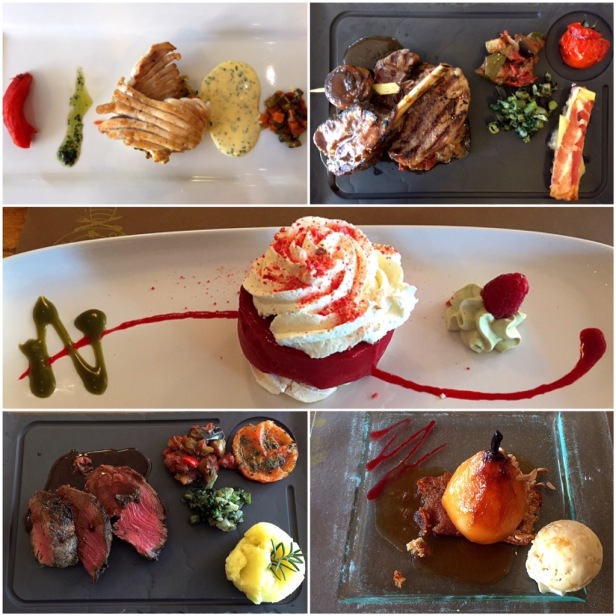 We had the Menu du Jour, which on Sundays and holidays is served only at lunch. For 22€ per person, we each had our choice of starter, main dish, and dessert. The food options do change depending on whatever’s in season.

We ordered the house red, which can’t possibly be bad in a place like this, right? Right! We were not disappointed. Wine Rating: Pretty Good.👍🏼 (see guide above)

They also have a cellar below the restaurant if interested in some wine tasting or purchasing a few bottles to bring home.

And when the weather’s nice, you can eat out on the terrace under the shade of a tree, surrounded by spectacular views of the Rhône River Valley. It had rained prior to our visit, so none of the tables were set up. But we did manage to take a pleasant walk around the property. Just lovely. 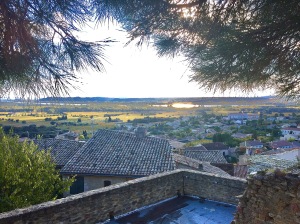 Reservations are highly recommended as Le Verger des Papes is a popular restaurant. But you can try your luck by getting there either before or after the mealtime rush as we did.

It’s absolutely worth it.

And in a way, I’m pretty glad the papacy was transferred back to Rome. Otherwise, we would have lost this tiny bit of hilltop paradise entirely.

For more information, check out the restaurant here.