On a trip to Greenwich intended primarily for a visit to its famed Sunday market and the Royal Observatory, little did I know I was in for an unusual treat.

Aaargh! Pirates. That’s what I think of whenever I see ancient sea vessels. But in the case of the clipper ship Cutty Sark, the iconic Scotch whisky comes to mind, too.

So after a satisfying day in the historic town of Greenwich, located merely less than an hour away from central London via the River Thames, my husband and I made time for just one more thing before heading back to the city.

Built in Clyde, Scotland, Cutty Sark is Scottish for “short chemise” and nickname for the scantily-clad Robert Burns character, Nannie the witch, depicted in the ship’s figurehead.

My expectations weren’t exactly high when we ventured to explore the Cutty Sark. Though it was my idea, frankly I almost changed my mind about going in.

A ship that’s set up like a museum? Hmmm…

The Cutty Sark was a clipper ship owned by the Jock Willis Shipping Line or John Willis & Sons of London. Built in 1869, it had just caught the tail end of an era when demand was high for cargo ships that could speedily ply the trade route between China and Britain.

It was also among the last of its kind to be built at a time when sailing ships were starting to give way to steamers.

Initially, the Cutty Sark transported tea. But as ownership changed hands over the years, she was eventually repurposed to transport wool from Australia, then served the longest (over three decades) as a cadet training ship, before finally being put on permanent dry dock as a museum in Greenwich.

At the risk of sounding like a gushing schoolgirl (over a ship museum at that), I think the better question to ask is: what’s not to like?

Okay, it might not be for everybody. But to put things in proper context, here are some of the reasons why I think I was drawn to this legendary ship.

For someone hailing from the eastern part of the world and who loves to visit the west, the connection was pretty much a given.

And with the Cutty Sark’s association with tea from China, well Hongkong just happens to be my favourite Asian city outside of Manila. Not unlike most westerners, I, too, am intrigued by the air of mystery surrounding the Orient.

Why is it a mystery to me when I am Asian myself? Precisely because we, Filipinos, are a mix. Many of us are, at least.

From the indigenous peoples of our 7,107 islands to the traders, conquerors, and travellers that came over to mingle with our friendly locals. It just couldn’t be helped, I guess. We are known to be a rather friendly bunch. 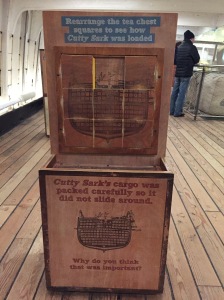 So malay, chinese, indian, spanish, french, etc. You name it, we’ve got it. And individually, these cultures fascinate me because yes, I’ve probably got a few of them flowing in my veins, yet each one remains foreign to me in its entirety.

Reason # 2: The Ship Itself as the Museum

My initial doubts about this aspect of the ship completely dispelled, I now dare ask: where else can you linger under the hull of a massive, historic ship and live to tell the tale?!

A little too dramatic perhaps, but really. Is there any other ship in the world of its kind that can be studied and admired in this manner? (Seriously, I’d like to know.)

Sure, the road to get to the Cutty Sark‘s current state involved a couple of disastrous fires and loads of money to restore.

But I walked under, through, around, and above this ship and ended up genuinely captivated by the way it was presented.

Not in a razzmatazz, Hollywood extravaganza sort of way. Rather, a more straightforward, understated manner that managed to keep my attention without in any way undermining the Cutty Sark‘s unique history.

And she’s got quite a story to tell.

Meant to instruct audiences of all ages (okay, mainly kids) about the Cutty Sark and the cargo ship’s role during the 19th century, this was probably the biggest aspect of the exhibit that I had wished our children were around to experience. 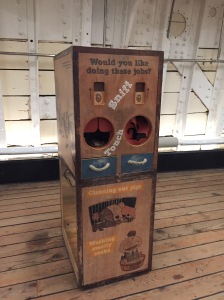 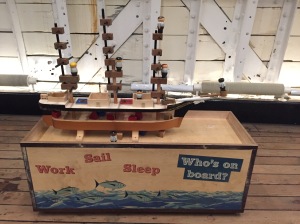 Aside from the instructional interactive displays, you can take the helm at the ship’s wheel (ahoy, Captain!), climb into the crew’s tiny bunk beds, and meet the characters central to Cutty Sark‘s history.

It’s never too late, of course. And kudos to the curator and everyone who made it possible!

I did not expect to love (yes, love! 😍) it as much as I did. Though our three boys weren’t with us, this “alone” time allowed me to become a child again almost.

Preferring to play war games with male cousins over tea parties with my sisters while growing up, this could very well have been another reason why I enjoyed the experience so much.

But would a girly-girl appreciate a visit here? I’d like to think so. I believe anyone with an interest in history, a spirit of playfulness, or a sense of wonder would.

And did I mention the chance to enjoy afternoon tea – complete with scones and even a glass of prosecco, if you wish – while sitting under the ship’s magnificent copper hull?

Live to tell the tale, I say! Aaaargh!

Neither pirates nor whisky on board, I’m afraid. But do check out the links below to plan your visit.

Getting There via the River Thames: Thames Clippers

One thought on “FUN AT THE LEGENDARY CUTTY SARK”