If traveling between Provençe and Lyon in France, why not make a stop in the Beaujolais wine region and treat yourself to a nice, relaxing break?

Typically considered a lightweight by wine connoisseurs compared to wines produced in the Bordeaux and Burgundy regions of France, I rather find the wines of the Beaujolais to be a pleasant match for our tropical climate.

First, maybe it’s precisely because I’m not a wine connoisseur (my wine vocabulary being limited to only two words: yummy or yikes), and second, maybe because I’ll drink mostly anything that’s red and comes in a wine glass. Mostly.

Seriously, though, I think the Beaujolais reds are perfect for a warm summer night.

Of course, living in the tropics given my aversion to the heat has never really stopped me from enjoying a glass or two.

But even if you aren’t into wines, a drive through the vineyards in the Beaujolais is still pretty cool.

The Grape, the Wine, the Region

Made almost exclusively of Gamay grapes, which have thin skin and the resulting low tannins (that bitter taste and rough feeling you get in the mouth), vibrant and fruity reds are what this region is mostly known for.
The finest wines produced here are those of the Beaujolais Crus, “cru” being a term used to indicate a winery’s reputation for producing quality wines, a classification that also dictates the price at which they are to be sold. 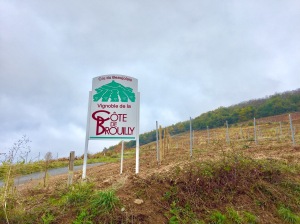 I’d see these names on wine bottles at the supermarket (yes, my primary source of wines like most people) and assume they must be familiar to many as well – with Brouilly and Cote de Brouilly being the most fascinating to me. Mainly because I enjoy pretending to know how to say it properly, complete with the guttural sound. (Now say it with me, “Bhroo-yee”.)

Each cru produces wine with its own distinct characteristics. But being more of a visual person myself, the sign most recognisable to me was Moulin-a-Vent, whose emblem is the windmill. The very same windmill that can be seen off the side of the road when you drive through the area.

The Beaujolais, however, became a household name in more recent times, thanks to the biggest party celebrated simultaneously around the world, aimed chiefly at marketing the wine’s youthful, fruity version – the Beaujolais Nouveau.

Without going through the barrel ageing process at all, these wines are consumed just weeks after harvest. This global celebration, a brainchild of wine merchant Georges Dubeouf, starts every third Thursday of November through the weekend each year to officially release the wines to the market.

This tradition of drinking the Beaujolais Nouveau, however, was nothing new. It first became popular in the 19th century, after harvest time. It was cheap but deemed good enough to drink over the course of winter while waiting for the more robust varieties to become available. In other words, it was something to tide them over until the better ones came along.

A perfect pairing with Brie or Camembert cheeses and pâtés or terrines, the Beaujolais Nouveau is launched yearly with events all over France, and all the way to Japan.

Where to Eat and Stay

There aren’t very many hotels or restaurants deep where the vineyards are. Perhaps due to their proximity to the bigger city of Villefranche-sur-Saône or even Lyon, both of which are merely less than an hour’s drive away.

But a great find is located in the small village of Vaux-en-Beaujolais. It’s a hotel-restaurant owned and managed by an enterprising young couple, Romain and Delphine Barthe.

Romain is a Michelin-starred chef while Delphine, granddaughter of local wine growers, is a sommelier.

The couple thought of opening Auberge de Clochemerle over ten years ago in order to provide sleeping accommodations to clients of the restaurant, instead of having them rush back to Lyon at the end of their meal.

First off, the meal prepared by Romain proved to be the most memorable one on the trip for me. Though greatly appreciative of the novelty and creativity found in most tasting menus, my husband and I actually prefer the simplicity of hearty, peasant food.

So upon seeing Romain’s delightful concoctions, I admit I was wary at first. I prayed for the food to be good because one, we didn’t go halfway around the world to eat bad food; two, if this turned out to be a disappointment, there’s nowhere else to go; and three, coming here was my idea.

I don’t know how he did it, but let me just say that all my fears immediately went away. From the delectable collection of amuse bouche that set the tone for the rest of the meal, to the smooth caramelised foie gras starter, to the exquisitely-prepared pigeon (no gaminess at all!), all the way to the wide array of delicious desserts.

How could something that looked either so delicate or other-worldly explode into such complex yet familiar, comforting flavours in the mouth? Well, that’s why Romain has a Michelin star, I guess!

While eagerly awaiting the series of surprises to come our way under our chosen set, the Caprice, Delphine recommended several wines based on our preferences and poured it into our glasses herself.

They had a capable and friendly staff. But just to show you how hands-on this couple was: upon returning to our room to retire for the night, we had trouble unlocking the door with the key provided. Delphine tried to unlock it herself, to no avail. After which, who else do we see trying his luck with the door? Romain! Still in his chef’s uniform.

Embarrassed and apologetic over what seemed to be a first time occurrence, Delphine  finally shows us back to our room. All’s well that ends well, we assured her.

Unfortunately, we had to leave early the next morning and didn’t get to try their breakfast. But upon checkout, waiting for us at the Reception was our very own copy of the recipe book that Romain and Delphine had co-written together. Signed by Romain. 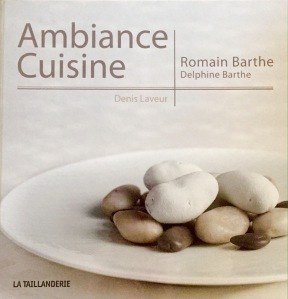 So why not cap your trip with a weekend of gourmet meals and a restful stay in a small, charming village surrounded by the rolling vineyards of the Beaujolais, hosted by Delphine and Romain?

And lastly, don’t ever leave without walking through the village or passing by this colourful tribute to “Clochemerle”, a 1934 satirical novel about a fictional village (and a somewhat scandalous urinal) that was based on the very same one you’re in, Vaux-en-Beaujolais.