London’s vibrant Notting Hill neighbourhood suddenly burst into the spotlight in 1999, thanks to the film with the same name. Is it worth all the hype? I finally decided to see for myself.

I’m generally a sucker for film locations. I just have to go and check them out. Maybe even copy a famous scene or two.

From inserting my hand inside Rome’s Bocca Della Verità as Audrey Hepburn did in Roman Holiday, to surrendering to the charms of Positano inspired by the Robert Downey, Jr.- Marisa Tomei movie Only You, to sitting in the same Paris café that Angelina Jolie did in the opening scene of The Tourist, co-starring Johnny Depp.

Curiously enough, however, Notting Hill didn’t move me in the same way. Though I thoroughly enjoyed the film and have, in fact, viewed it countless times, the pull to see where it was shot just wasn’t there. And so I passed up the chance to go there on previous visits to London.

Until recently with my husband.

What gave? Almost 18 years had gone by since the film’s release. By then, my fear of getting sucked into what could all just be hype drummed up by Hollywood – and consequently wasting precious time in London – had diminished considerably. And, frankly, we didn’t have much else planned that day.

So, off we went to Notting Hill.

We took a bus that let us off in Notting Hill Gate, and found our way on foot to Portobello Road, the heart of the hill.

From this end of Portobello off Pembridge Road, we were greeted by an interesting mix of local specialty shops and pubs before getting to the charming residential section.

The row of townhouses on this stretch was an absolute feast for the eyes. Though I can only imagine what the poor residents must go through on a daily basis, with tourists like me gaping and gawking and snapping away with our little cameras.

Further beyond, past Chepstow Villas, lies the main commercial section of Portobello Road. With a concentration of shops and restaurants – and where market stalls are set up right on the street in front of the regular shops – one immediately senses a shift in the energy.

The kind we get when we feel something exciting’s coming our way.

Good thing we got to Notting Hill early, just as the regular shops were opening. This allowed us to see what the store fronts actually looked like before the market stalls blocked the view.

Products sold here ranged from precious antiques to kitschy souvenirs to serious memorabilia to hip and vintage apparel. Not to mention the wide selection of food options available, which totally showed the cultural diversity in Notting Hill.

And speaking of food, our stomachs finally led us to England’s first purpose-built cinema.

Originally called the Imperial Playhouse, which opened in 1911, it has since been transformed into this fabulously-designed cinema that takes viewing to a whole different level. Not just in a state-of-the-art techie way, but rather in terms of style, comfort, and enjoyment. For seating, they’ve got armchairs, front row beds, then sofas at the back.

We almost missed it, actually, as by midday the market stalls along Portobello Road had already been set up, blocking store fronts.

And attached to the cinema is the Electric Diner. But it’s not just any ordinary diner. This one has super cool interiors and serves their own take on diner classics, all prepared bistro-style. 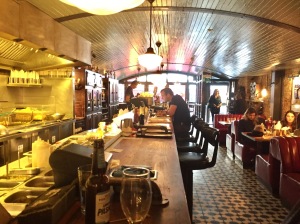 They sat us at the bar overlooking the open kitchen. At first I thought it strange that they would seat us there when there were other couples who were given tables by the booth. I was going to have us moved when I realized it was actually nice to be seated right where we were. We got to enjoy our beers while watching the cooks in action. (One of them actually looked like Ryan Gosling! 🎶 City of stars…🎶 Oops, wrong film. Focus: Notting Hill.)

My husband ordered their popular double cheeseburger while I had the three-bean chilli with cornbread. Yum! No wonder these were among the bestsellers. But next time, I think I’ll try the duck confit hash with mornay sauce and eggs. Hmmm….. 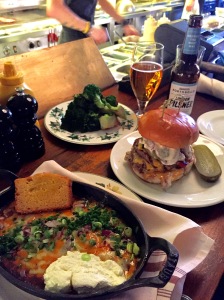 Absolutely! As you walk further along Portobello Road (which one really ought to do after a big lunch like we had), make sure to explore the streets intersecting it and see where they lead you.

Here we discovered a mixture of charming and elegant townhouses that seriously got me wishing I could live there. Built in the 1840s, they were part of two major developments that urbanised what was formerly rural Notting Hill.

The shops in these areas are also larger and more upscale.

Not unlike any older neighborhood, Notting Hill has its own share of skeletons in the closet.

Notting Hill was once filled with pottery warehouses and piggeries in the early 1800s. Sanitation was deplorable, with mortality rates off the charts.

Efforts to improve living conditions were made over the years and by the mid-19th century, construction of tenement housing and residential townhouses commenced.

After the first and second World Wars, however, these homes were subdivided into multi-dwellings and the entire neighbourhood deteriorated further into a full-blown slum, “crawling with rats and rubbish”, as accounts claim.

Then you’ve got serial killer John Reginald Christie of Rillington Place on Wesley Square who killed over eight people, including his wife, from 1943 until 1953. The bodies were discovered after he moved out in 1953. Christie was hanged, but only after a neighbour had been wrongfully accused, found guilty and hanged for the murders.

It was the “bad part” of the borough of Kensington and Chelsea, which has always been  known as an expensive area of London. But looking around Notting Hill now, one can see that it’s finally earned its right to be part of this exclusive borough.

After all that excitement, why not end your day in Notting Hill with a quick stop at this iconic pub? It’s on Kensington Church Street, a 5-minute walk from the Notting Hill Gate corner where the bus let us off earlier at the start of our day.

You can’t possibly miss it.

Built in 1750, making it one of the oldest pubs in London, it was frequented by Winston Churchill’s grandparents. And so after World War II,  it was renamed after them.

A welcoming sight that never fails to stop people in their tracks, the building’s exterior is filled with colourful flowers and vibrant greens for the most part of the year. Then during the holiday season, these plants are adorned with thousands of bright, festive lights. Absolutely over-the-top but totally effective.

So, if you hadn’t yet picked up on how I feel about Notting Hill: yes, I think it’s definitely worth a visit. Whether you’re a fan of the film or not. (Finding the bookstore owned by Hugh Grant’s character didn’t even cross my mind. What’s wrong with me?!)

A stop here may not be necessary on a first trip to London if you have a long list of other things to do, other places to see. But if this isn’t your first visit or if you’re genuinely interested in antiques or exploring a unique London neighbourhood (or you simply love the movie, of course), then Notting Hill is a must.

I’m pretty sure we’ve only scratched the surface here. Next time, I plan to go on an historical or architectural walking tour of Notting Hill with a local.

And maybe, just maybe, I’ll finally pop into that bookstore.

One thought on “MUCH ADO ABOUT…NOTTING HILL?”