When we chose Amsterdam as the destination for our family vacation some years back, it was largely dictated by my daughter’s then obsession with John Green’s The Fault in Our Stars.

TFIOS was memorable to a whole generation of tweens, but it was especially memorable for this Traveling Tita who took her then tween to Amsterdam to walk in the footsteps of Augustus Waters and Hazel Grace Lancaster. So the deal was, channel Augustus and Hazel Grace, find the bench, go the the museums, take the tram, stay even for just 1 night at Hotel de Filosoof and most importantly  watch the movie on the first day of the world premiere. Easy right? Since we were already in Amsterdam. NOT! The worldwide movie release, June 6 ( I remember so clearly) was everywhere but Amsterdam.

So that’s how we found ourselves taking a side trip to Prague. Yes, a 2 hour plane ride to catch the 1st day of TFIOS. But I’m glad things turned out the way they did because we got to visit Prague which was totally not on our itinerary!

First stop, Amsterdam. John Green chose the perfect city as the backdrop for the book. The already sick Augustus  Waters and the equally sick Hazel Grace together with her mom fly to Amsterdam to fulfil a dying wish. 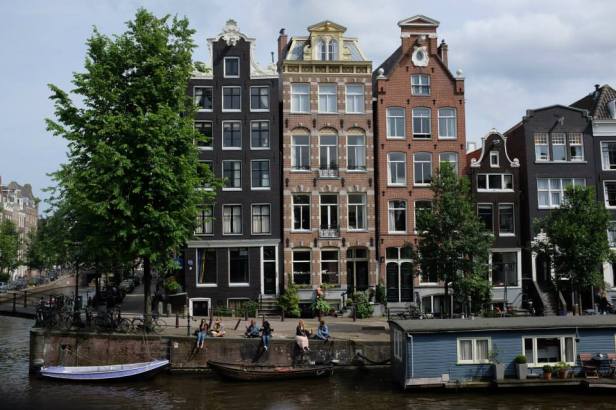 So how much of their footsteps did we actually follow?

For one precious night after we got back from Prague, we were able to stay in the very room of the very hotel made famous by the book. The “Stars” room was a tiny charming room that looked out to Vondel Park. The floor was lopsided so it felt like we were sleeping in a ship and I actually got seasick. On the shelf was a signed copy of the book, signed  by the author and by the many tweens before my tween who stayed in that room. That “Stars” room was booked solid by legions of TFIOS fans (and Moms) so it was no small miracle that we were able to stay if only for 1 night.

What about the famous bench? Every time we spotted a bench, we thought it was “the bench”. We can’t be sure if we actually saw it because all the benches are identical and they are all beside various canals!

Trams and Boats and Museums

We took the tram, just like they did, standing up of course. We took a canal cruise and was just as amazed with the city as they were. We went to the Anne Frank museum and felt as teary-eyed Hazel Grace. Coincidentally just like in the movie, there were also musicians playing outside the Rijksmuseum.

The Side Trip to Prague

At this point in our vacation, we went our separate ways. My husband and son went on to Greece and so it was just me and my tween off to Prague. A 40+ year old Tita (me) and a tween arriving at 11pm in an unknown country with a different currency and a hotel car that failed to meet us at the airport. Counting on the hotel vehicle, we had done zero research on how to get to the city centre. What to do? Well, be brave and take a cab. The airport it turned out is quite a distance from the Old Town and you will have to pass through mountains and poorly lit winding roads with a taxi driver who speaks no English. Just when I was about to give in to a full blown panic attack thinking of the TV series Scam City, the magical lights of Prague Castle appeared and it was the most beautiful thing.

The Day of the Movie

Fearing we would not be able to get tickets, we were at the theatre two hours before screening time. What a surprise it was to find only 5 people in the big, modern movie theatre. My daughter and I, my nephew who met up with us in Prague and 2 others, another mom and her tween! We were ready to watch the movie in Czech with English subtitles, what a pleasant surprise to watch it in English with Czech subtitles.

As expected, my tween cried buckets during the entire movie and then some! We walked the entire length of Charles Bridge after listening to her talk about the movie, the book, Augustus and Hazel Grace until the sun set on the Prague’s Vltava river.

My tween is now a teen and Hotel de Filosoof has closed down temporarily. She has all but forgotten about John Green and The Fault in Our Stars, but I’m sure she will always remember her once in a lifetime Amsterdam-Prague jaunt with her (pretending to be ) fearless mom.