Chicharon is, according to the person who runs MatMat’s – free cholesterol as opposed to cholesterol free.

That it is, but is it also irresistible! Especially when freshly popped. Carcar City, about an hour from the city centre of Cebu is famous for its cracking, addicting, lip smacking, artery clogging chicharon. I dare anyone to eat just one.

Among the famous chicharon brands in Carcar, perhaps the most well known is MatMat’s which has been around since the 1950’s. Harold Nacuna who manages MatMat’s told me the story of how chicharon came to be, in Carcar and perhaps in other parts of the country as well. He says that during the Japanese occupation the Japanese soldiers would have the pigs slaughtered by their Filipino helpers. They would of course take all the good parts and throw away the “bad” parts. These included the fatty skin of the pig. Being short on food, the ever resourceful Filipino helpers found a way to cook what would otherwise have been thrown away, and this is how they perfected chicharon.

He told me that the belly part is best for chicharon, it’s what’s called “carajay” in the local dialect, but this spoils easily, so what is commonly used is the backside. You would think that seeing how chicharon is made up close would discourage this Tita from eating chicharon like popcorn, unfortunately not. 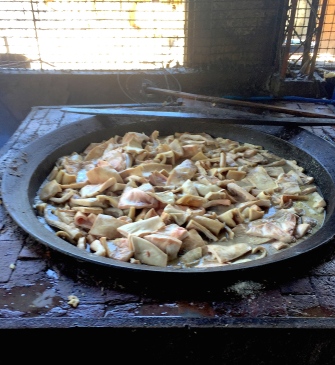 The prep and cooking area is an open smoky area with huge vats of boiling oil. Pork skin in  huge blue plastic containers wait to be cut up. Thick smoke envelopes the whole process because wood and not gas is used to fire the giant vats. Using wood instead of gas I believe adds to the flavour of Matmat’s.

The pork skin is first cut up then boiled in tap water until soft. Harold says that only salt is added, no MSG. I’ll take that with a grain of salt! Once boiled and softened, it is cut up into smaller pieces and deep fried not once but twice. Once at a temperature of 200 degrees and then again at 400 degrees so that the skin puffs up and blisters. Now that’s starting to sound like chicharon!

Lucky for us we got first crack at the cracklings. I’ll say it again, freshly popped chicharon is cholesterol heaven! The fresher the chicharon the better it tastes. I would give it a shelf life of no more than 1 week after which it goes rancid.

Now, Carcar has other attractions other than chicharon. It is a beautifully preserved heritage town with wonderful original and restored houses and structures from the Spanish and American colonial periods. So if you’re planning a chicharon trip to Carcar, make time to see some of its wonderful architecture. There’s lechon too in the market, but I would skip it!  Chicharon + lechon doesn’t sound like a good idea! 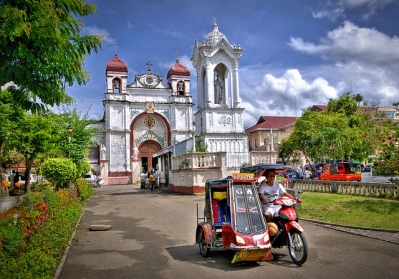 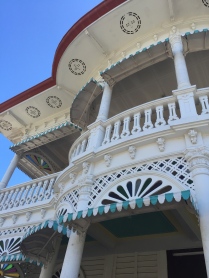 Check out a previous post Lechon Tripping in Cebu