Cuenca in central Spain, was almost written off as a once prosperous but forgotten town. It is now a Unesco World Heritage Site, and it owes its rebirth to one Fernando Zobel.

If you are Filipino, the name Zobel de Ayala will be familiar. It is the name  we associate with our malls, our villages, our streets and even our museums. The Fernando Zobel referred to here has long since passed, but his legacy and influence lives on. Artist, teacher, photographer, philanthropist and founder of the first abstract museum in Spain, the  Museo de Arte Abstracto Espanol.

So what was he to the Zobel de Ayalas of today? He was the uncle of Don Jaime Zobel de Ayala and grand uncle to Jaime and Fernando Zobel de Ayala of Ayala Corporation. Born in Ermita in 1924 he spent time in Manila, Switzerland, the United States and Spain. He died of a heart attack in Rome in 1984 at the age of 60.

Sometime in the 1960’s, Fernando Zobel decided he wanted to establish a colony for abstract painters like himself. After looking at possible places in Madrid and Toledo, he chanced upon Cuenca and was enchanted with its Casas Colgadas or houses hanging precipitously from a cliff, never mind that they were deteriorating. He purchased 3 hanging houses and proceeded with meticulous restoration work to transform them into what would become the Museo de Arte Abstracto Espanol. Together with fellow abstract artists they brought new life and energy to this once abandoned town. Cuenca soon became a destination for artists, gallery owners, art collectors and tourists, and a dying city came back to life.

Today there are many other abstract art museums in Spain, but when it was opened in 1963 it was the first of its kind. For that alone, the town of Cuenca is worth a visit. The museum houses numerous  paintings by Fernando Zobel, but it is also a showcase of other famous Spanish abstract artists like Gustavo Torner, Antonio Saura, Antoni Tapies, all personal friends of Fernando Zobel. 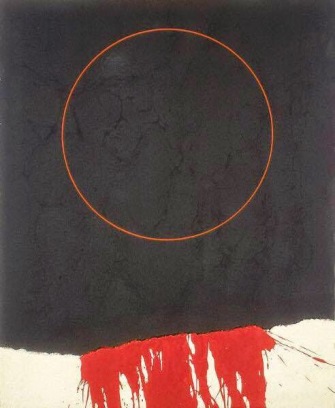 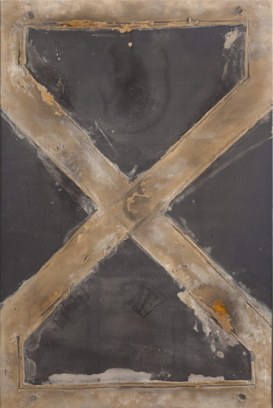 The interiors of the museum are a stark white with the exposed beams of the original structure intact. Light is all around bouncing from one white wall to another. The passages are sometimes narrow but each opening reveals a surprise. The views of the gorge outside are jagged and spectacular. 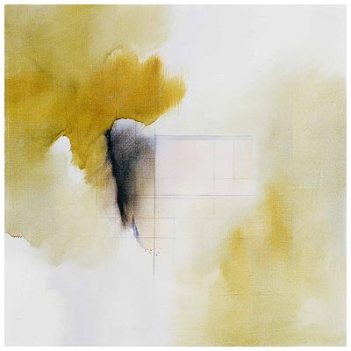 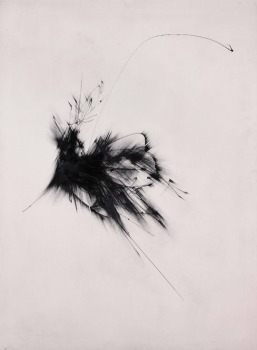 Paintings by Fernando Zobel. He famously used a surgical syringe to apply fine lines of paint.

Fernando Zobel so loved Cuenca that he made arrangements to be buried there. When he passed away in Rome, his remains were brought back to Cuenca. A funeral procession never before seen and still talked about to this day accompanied him to his final resting place. He is buried at the Cementerio de San Isidro overlooking the Jucar gorge which figured in many of his sketches and paintings.

I’ve visited Cuenca twice, both in winter. I imagine coming back when the weather is warmer but winter more with its sparse landscape both naked and raw seems more appealing to me.

How to get to Cuenca.

Cuenca is about 50 minutes by train from Madrid. Your stop is Cuenca Fernando Zobel. As a tribute  to the Godfather of Cuenca, the train station, a bold and  modernist structure is named after him. 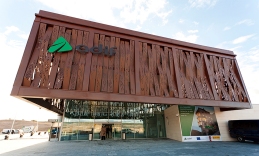 What to do and see in Cuenca?

The old town has the very beautiful gothic New Cathedral of Cuenca built in 1196.

Photo below shows the Saint Paul Bridge which you have to cross to get to the museum. It’s both jaw dropping and spine tingling.

For a great asador meal of roast lamb, make a booking at the restaurant of Parador de Cuenca. Better yet stay the night at this converted 16th century monastery.

And that’s how six moms spent a day in Cuenca. More about our Spain trip here.