The Swiss Riviera made more intriguing by its castle’s most famous prisoner.

Lake Geneva (Lac Léman) has never been the same since Lord Byron came out with his 1816 poem, The Prisoner of Chillon.

Loosely inspired by the prison experience of François Bonivard, a Genevan patriot who belonged to an old Savoyan family and was imprisoned at the Chateau de Chillon from 1530 to 1536 by Charles III, the Duke of Savoy, suffice it to say that Lord Byron took artistic license to heart and ran away with it.

This isn’t to say, however, that Bonivard’s real life was boring. Far from it, in fact.

Educated by monks since childhood and sent to Italy for further studies, Bonivard openly opposed Savoy’s efforts to control the region. Even as he took over his uncle’s role as prior or head of the Cluniac monastery in St. Victor near Geneva, he continued to speak against the Duke of Savoy and the bishop of Geneva.

After an initial 2-year imprisonment at the Duke’s castle in Groleé along the river Rhône, where he was able to escape with help from supporters, he was again caught after taking up arms against the Duke for seizing his monastery and taking over its finances. This time, he was kept at the Duke’s Chillon castle for six years, the last four of which were spent underground in the dungeon.

After the Bernese conquered the region in 1536, they released Bonivard. The monk then became a Protestant and married not once, not twice, but four times – two of them to widows.

Dedicated to spending his money on endless partying, he was forced – at 69 years old – to marry his last and final wife, an unfrocked nun many years his junior, to avoid further scandal. Ironically, she was arrested years later for immorality and infidelity right in their own home. Before Bonivard could exonerate her, however, she was drowned in the river Rhône and her lover beheaded.

In financial debt, Bonivard spent the rest of his life writing and publishing books, and finally died in 1570 at the age of 77.
For a peek into the Duke of Savoy’s castle where Bonivard spent six years of his life, check out Chateau de Chillon.

We stayed at one of only 50 Swiss Historic Hotels called Hotel Masson in Veytaux, a short 5-minute drive from the centre of Montreux.

Set in a Belle Époque-style building that dates back to 1829, it is the oldest hotel in the area and has rooms with great views of Lake Geneva and the French Alps.

We were lucky to find rooms available in May, specially as we had booked late.

During our stay in this B&B, three things stood out for me.

First was the Old World elegance of the hotel – from the time we entered, as we took the stairs up to the upper floors that overlooked the bright hallway, to the classic, cozy interiors of our spacious guest room.

Second was the freshly-made fruit jams served at breakfast. In fact, they were still warm! Of course, it didn’t hurt that the interiors of the breakfast room was elegant as well, complete with starched table linen and views of the garden surrounding the hotel. 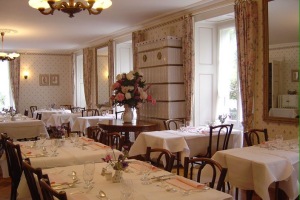 And third was the friendliness of the staff. They were efficient but warm.

I had read some reviews, however, about the heat in the guest rooms at the height of summer due to a lack of either air conditioning or electric fans. So you might want to keep this in mind before you book. As we traveled in late spring, heat wasn’t a problem yet.

Another thing you may have to consider is its lack of elevators. The bigger rooms are at the top floor, so this could be a challenge for some.

There have also been comments about the dated furniture and furnishings. This is an historic hotel, after all, so I believe that comes with the territory. If hip and modern are what you’re after, you might have to look elsewhere.

They do offer free parking, however. Important for those who, like us, prefer to rent a car and drive.

Aside from the Chateau de Chillon, people flock to Montreux for the annual Jazz Festival in July. From here, it is also just a 1-1/2-hour drive to the French Alps in Chamonix.

Montreux also has a famous covered market that’s open every Friday morning and a yearly Christmas Market, the largest and the best Christmas market around Lake Geneva, held from late November until 24 December.

We ourselves had made this stop in Montreux as part of the Swiss leg of our trip, between Alsace in France and the Italian Lake District.

To plan your trip around Lake Geneva, check out this Guide.