Charming and cosmopolitan aren’t necessarily words that go together to describe most major cities, but that’s exactly how Munich was to me.

I remember reading fairy tales as a young girl and getting lost in a world of characters on fantastic, magical adventures. I could clearly picture in my head gingerbread-like houses, thick forests, and princely castles. Now traveling as an adult, visits to the Black Forest and Bavaria were like stepping into a part of that world.

Munich, however, was a slightly different story. The city, specially the older section, still maintains that storybook quality typical of smaller Bavarian towns, but here it’s uniquely combined with the elegance and modernity found in most major capitals of Europe. Plus, it’s clean and efficient with tons of soul.

Established in 1158, the village’s growth and rise to prominence came in large part due to its location near a bridge on the banks of the River Isar, the Benedictine monks who settled here and the beer-making tradition they set up (which exists to this day), and the Wittelsbach dynasty that made Munich its home.

An Easy Day in Munich

After a 1-1/2-hour drive from our base (you can read about it here), our day began with a pleasant stroll – and a playful romp for the boys – in the Hofgarten.

Built in the 17th century, the Hofgarten, or Court Garden, was part of the royal residence of the Wittelsbachs, rulers of Bavaria – first as dukes, then as electors from the 17th century onwards, and eventually as kings from 1806 to 1918.

Coincidentally, American poet T.S. Eliot, who I had mentioned in my post on St. Louis, used Hofgarten in his 1922 work, The Waste Land, to symbolise the empty charms of a dying aristocratic life. Bit of a  downer there, so let’s move on, shall we?

Today, the Hofgarten is open all day, all year where the public can enjoy the grounds with its cool fountains, long tree-lined arcades, and Italian Renaissance-style central pavilion celebrating nature’s goddess, Diana. Entrance is free.

On the eastern corner of the garden lies a gate that led us to the Odeonsplatz, the large square built in the 19th century and named for the Odeon concert hall, which now houses the Bavarian Ministry of the Interior, and onto our next destination.

As if this Catholic church’s Baroque architecture wasn’t impressive enough, even more magnificent was its striking white stucco interiors, decorated by Italian, German, and French artists and craftsmen.

Designed by Italian architects Agostino Barelli and his eventual replacement, Enrico Zucalli, the Theatinerkirche St. Kajetan was built for the Italian Order of the Theatines in thanksgiving for the 1662 birth of the long-awaited heir to the throne, Prince Max Emanuel.

Several members of the royal family are buried in the Wittelsbach Crypt inside the church, which is open to the public.

Now run by the Dominican Order since 1954, the church is also a regular venue for classical concerts. This means the acoustics must be fabulous. Must make note to hear one if we return.

Leaving the church, we again crossed the Odeonsplatz. This square was the site of the 1923 Beer Hall Putsch, a brief battle where a younger Adolf Hitler and his then fledgling Nazi movement attempted to seize military power from the Imperial Defence forces, resulting in the deaths of 16 Nazis and the imprisonment of Hitler.

Walking past the Felderrnhalle, or Field Marshals’ Hall, which was commissioned by King Ludwig I of Bavaria in 1841 to honour his army, we ended up in the royal residence.

One amazing feature of this building is the trompe l’oeil on its exterior walls, as seen from the imperial courtyard. The sheer vastness of this concrete canvas just blew my mind. And it’s outdoors and exposed to the elements yet didn’t show any obvious wear.

Having served as the royal residence and seat of government from the 16th to the 19th centuries, and now a museum since 1920, it would surely have been interesting to go inside. Unfortunately, we did not get to do so on this visit. Perhaps, next time.

As is the case with most monuments, restoration works are done every so often, so please do check their website if you plan to visit.

A 10-minute walk from the royal palace is Mary’s Square, Munich’s main square since 1158 and a venue for markets and tournaments during medieval times.

Difficult to ignore and dominating the northern side of the Marienplatz is the Neues Rathaus (no rats here, it’s the German term for City Hall – the new one), whose tower holds the Glockenspiel, a carillon and mechanical display with 43 bells and 32 life-sized figures that chime and re-enact two stories from the 16th century. This occurs at 11am everyday and also at 12nn and 5pm in the summer, and lasts for about 15 minutes at a time.

The top of the Rathaus offers views of the city as well, so if you have time, do check it out.

Near the Marienplatz is the cathedral of the Archdiocese of Munich.

Construction of this church dedicated to Our Lady began in 1468. I noticed, however, that even though it’s Gothic, it was quite bright inside. Not gloomy at all. Is it something about the sensibilities of the Bavarians, I wonder, that make them prefer to be surrounded by light and uplifting colours? I say this because the churches we came across in Mittenwald and Garmisch-Partenkirchen seemed to share the same qualities.

Speaking of uplifting, consider climbing up the south tower for terrific views of the city, sometimes with views reaching all the way to the Bavarian Alps on a clear day.

The Holy Roman Emperor Ludwig the Bavarian and some of the Wittelsbachs are buried here, but the cathedral is also known for the legendary devil’s footprint on the floor near the entrance. I totally missed this, but hey, there’s some gloom for ya.

Passing by the Porsche Design Store at the corner of the Dienerstrasse is the way to our next stop.

It was time for some traditional Bavarian fare. So we headed to – where else? – the beer hall of the Hofbrauhaus (or Royal Brewery) in Platzl. This building used to be the brewery itself and is only about a 10-minute walk from the cathedral.

Remember the Rathaus Glockenspiel? The 16th century story being re-enacted in the upper half of the display was that of the wedding of the founder of Hofbrauhaus, Duke Wilhelm V. His original brewing recipes are still being used in the brewery to this very day. 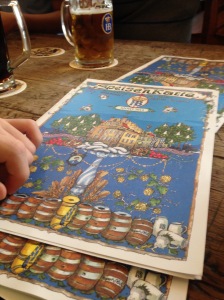 Having a meal here was quite an experience. The interiors were truly Bavarian, the elaborately-painted ceilings a pleasant sight to behold. Just an all-around feel-good place – and that was prior to chugging a glass of bier or two.

The place may be a bit touristy for some, but that’s exactly what we were, after all. Food was good, service was warm and efficient, the atmosphere bright. We were happy. A warning, though, for people who need to sit with their backs supported. This being a beer hall, the only seating I saw were benches set on both sides of long tables. Some benches had back rests, some didn’t.

Needing a stroll after a satisfying meal, we headed over to the market.

An area covering 22,000 square metres with 140 stalls, it is a popular outdoor food market near the Cathedral and St. Peter’s church.

The Viktualienmarkt (market selling victuals or food) would have actually been a fun alternative to eating at the Hofbrauhaus, except that the day got warmer and staying comfortably indoors became the better choice.

Aside from ready-to-eat food, there were also stalls selling flowers, fruits, poultry, fish, game, spices, breads, cheeses, and many more. There was a biergarten, too.

Established in its present site in 1807 initially as a farmers’ market by Maximilian I, it has since evolved into more of a gourmet market. Open from Monday to Saturday, most stalls open from 8am to 6pm, others until 8pm.

Walking around the market, we chanced upon what initially looked like a totem pole. But it was actually a maypole, common among Celtic countries traditionally to represent the village and its trades to traveling salesmen or to traveling craftsmen looking for a new master to train with.

Written at the bottom of the maypole was a curious detail that said “Münchner Reinheitsgebot 30 November 1487”. It refers to the Beer Purity Law written by Albert IV, Duke of Munich, which was revised in 1516 for all of Bavaria and later on adopted by the rest of Germany. It’s a series of regulations limiting the ingredients of beer in Germany to only three: water, hops, and barley. Nothing else. This was meant to ensure that the people who worked in the fields drank beer that wasn’t mixed with any other ingredient that could make them sick. Interesting tidbit.

For some retail therapy in Munich, the pedestrian area on the stretch between the Marienplatz and the Karlsplatz called Stachus is lined with shops of both local brands and international brands like Zara and H&M.

But for some really serious shopping (or people watching), the bigger international fashion brands like Dior, Valentino, Hermés, Escada, Dolce & Gabbana are along the elegant Maximilianstrasse, one of the four royal boulevards in the city. Named after Maximilian II, the popular King responsible for restoring stability in Bavaria after the 1848 German Revolution, this wide avenue immediately felt stylish and cosmopolitan the moment we stepped into it – yet vibrant and accessible. King Max would be proud.

All this walk took only one day at a relatively leisurely pace. It gave us just a taste of this city that left us wanting for more.

So, would I want to go back to Munich? Absolutely.

Photo credit for the Rathaus Glockenspiel: This Wikipedia and Wikimedia Commons image is from the user Chris 73 and is freely available  here.

One thought on “MUNICH: ÜBER-COOL WITH OLD-WORLD APPEAL”